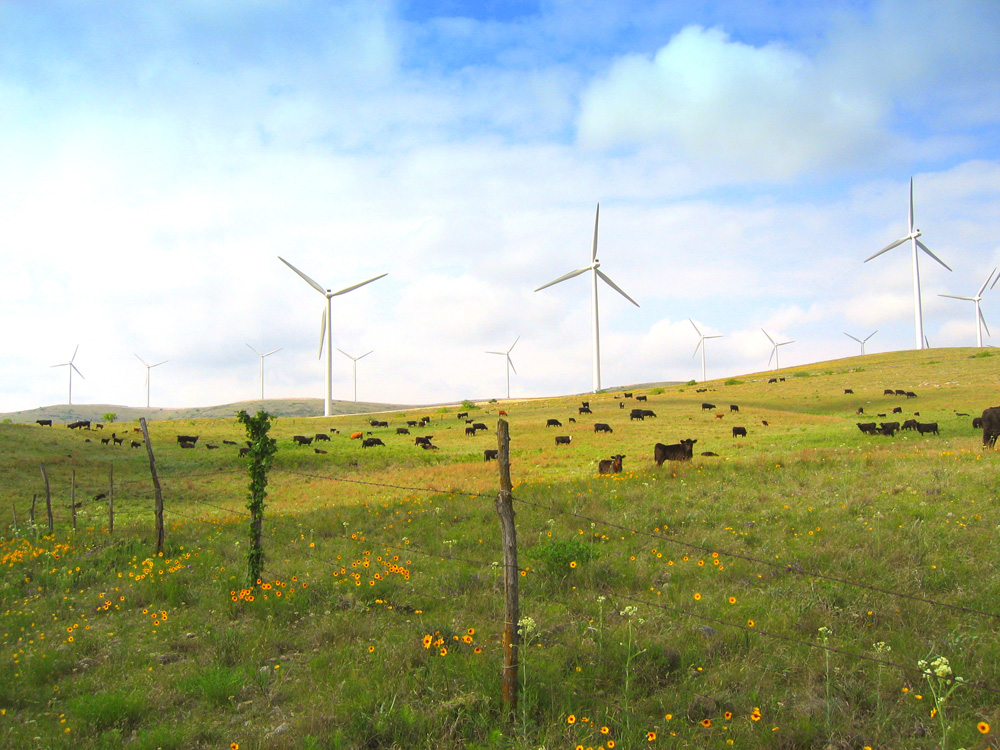 AKA: The digression of switching from an office job to a construction job in a land rife with dust and methamphetamine.

Once upon a road tripping time in my life, I was left without a job and needing money. Setting out each day in the middle of America, I found nothing until I decided to just let go and drive a different way. That day I found work.

I came across two dudes, driving a company truck, who worked for a windmill company called Vestas. When I chatted them up, they said that yes, they were hiring, and I should go back on up the road a bit, to try to sort something out. 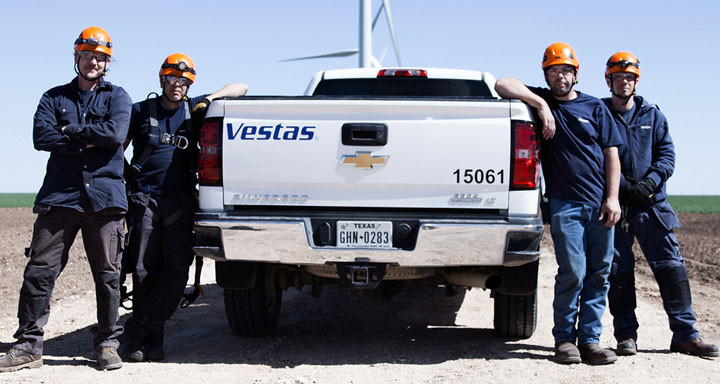 A case of mistaken identity (as I look a bit Danish) and a drug test later, I was finally employed building wind power towers/generators.

My days started at 5am, as it took a bit to drive from my home to the site. At 6am, we all met in the parking lot to get a pep talk. Our time on the clock started then. For after, we loaded in our pick-up trucks and drove to where the work would begin. 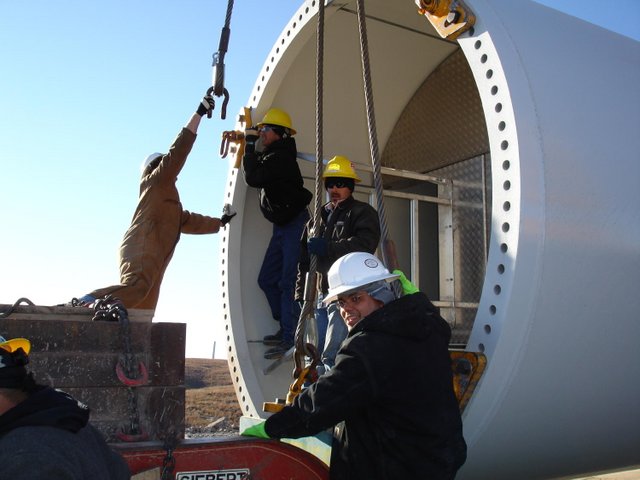 Our crew consisted of 4 or 5 dudes, plus the guys on the cranes. They got paid a bit more, probably because they had to be responsible for our lives via the ever-present dangling heavy things. 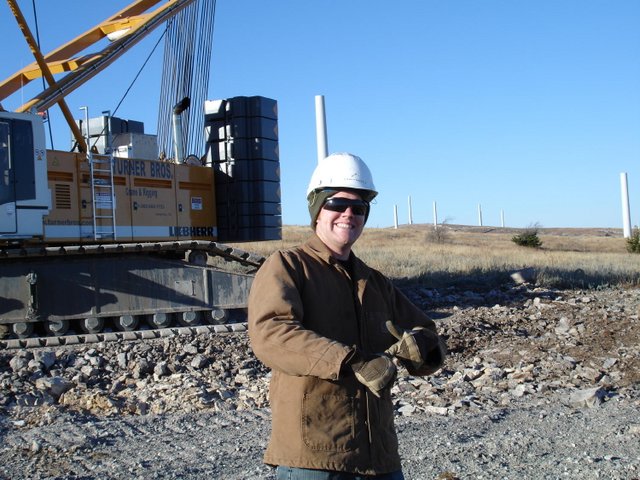 In any event, here’s me and a bit from an email I sent way back when:

I am building about 84 120ft tall wind power installations in Oklahoma. I’m working for a Danish Company called Vestas and they’re paying me 15 bucks and hour to work about 72 hours a week. Thank God I have off this Sunday… cause my joints and everything else already ache… like crazy. Construction work is kinda fun though. I mean at least you have something to show for your pains.

Now I guess all I have to do is conquer my fear of heights, climb 40 -80-120 feet up completely vertical ladders, push 70,000lb hollow columns into place in 40mph winds, slug around 100lbs repetitively, and try not to kill the loud mouthed unorganized ignorant peoples on my work crew. No worries though. I just loathe the day I have to be 120ft up in a tower in 40mph winds trying to attach a blade. Thinking of that.. perhaps I should ask for some more prayers.

Yes, days spent on construction sites introduce you to many things. One of the most contrasted, had to be the mentality of those I was working with. I remember a conversation there-in: 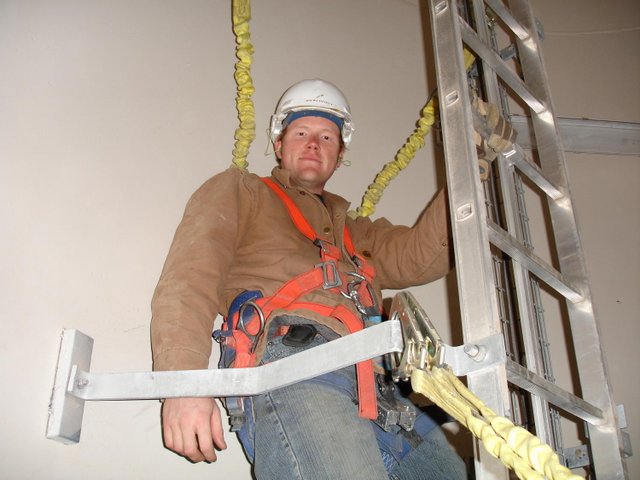 Person A: “If you’re gonna be up there you should attach your safety harness to something.”

Person B: “Nawww… I got life insurance, don’t worry about me. If I fall it’s my fault.” 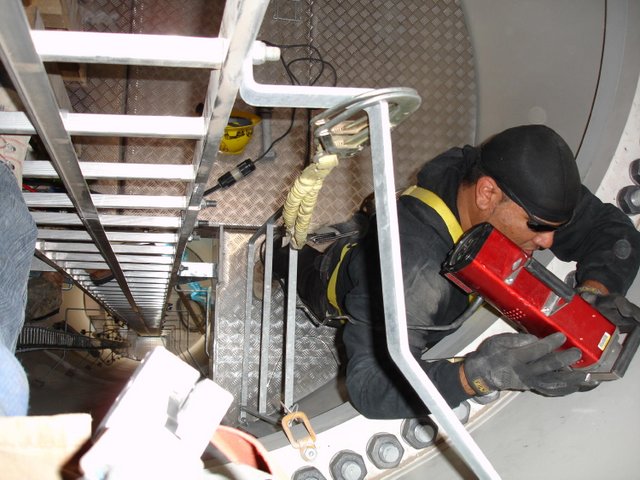 What else is pertinent in retrospect? Well, finally knowing the true meaning of delirium seems important. I guess it’s only when you’ve been working labor intensive non-stop 12-16 hour days, for upwards of 3 weeks at a time, that you finally get to that place.

For me, that moment came on a chair. I was sitting in my mom’s living room, trying to write an email. I turned around after, and though my mind was firing and alive, my body wasn’t. I was lost in thought, but unable to say any of it. Exhausted physically, yet cognoscente and aware. 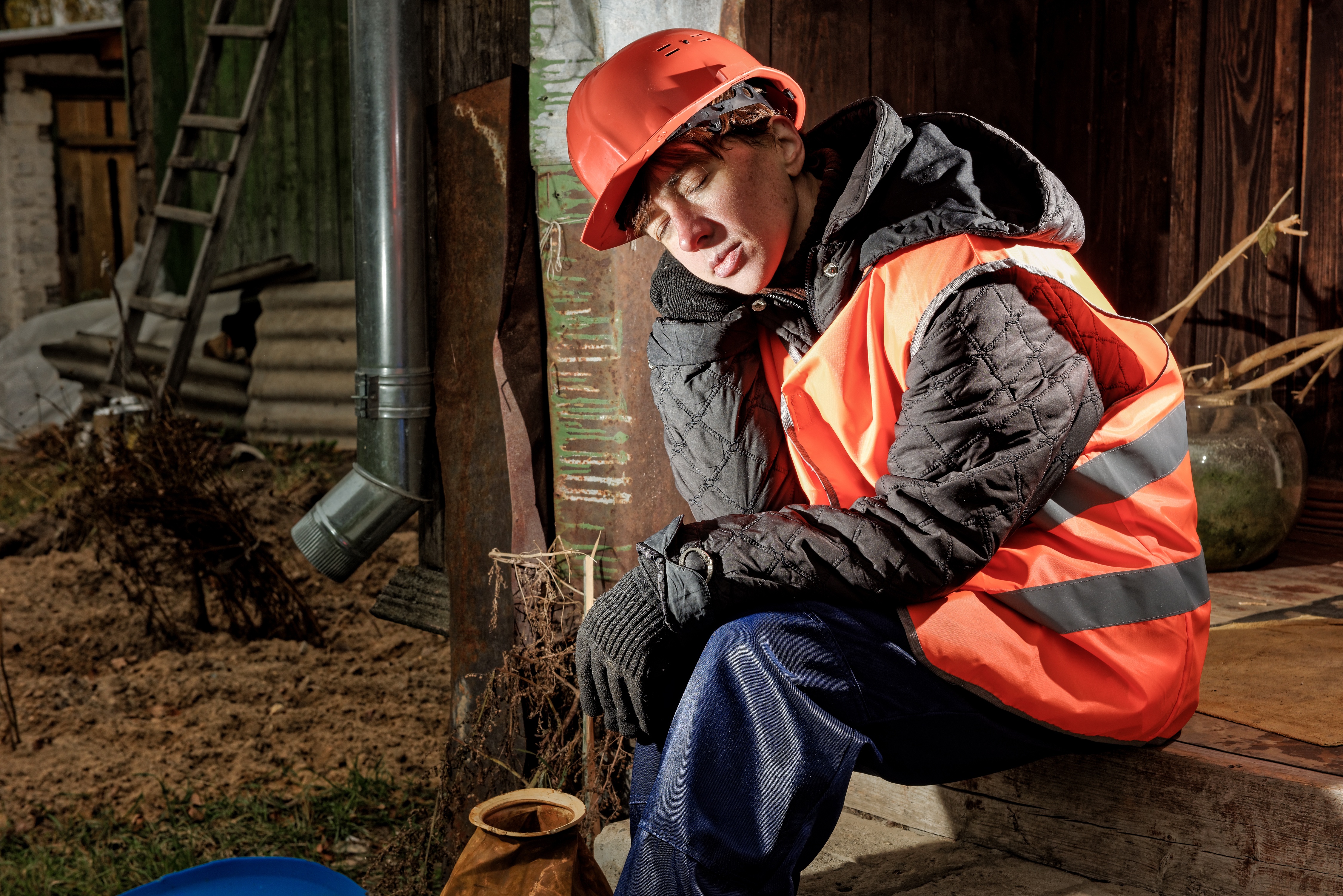 I guess it was after about 5 minutes or so that my mom took notice; saying something along the lines of “go to bed.” After about 5 to 10 minutes more, I finally made my way there. 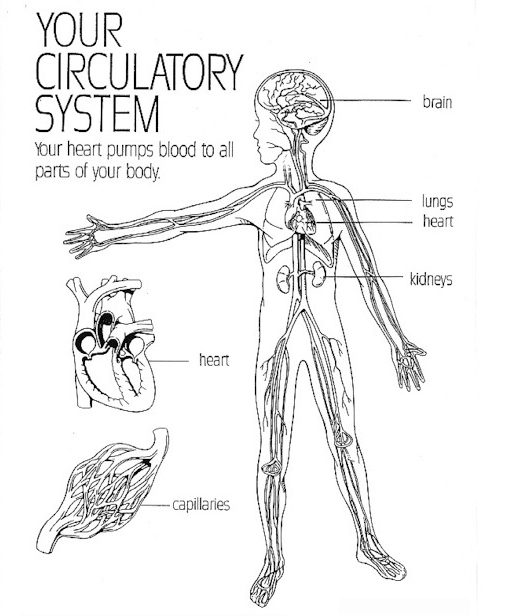 Weird stuff. Another body induced meditation of sorts, but this time a separation between my body and mind gave insight, not hot. 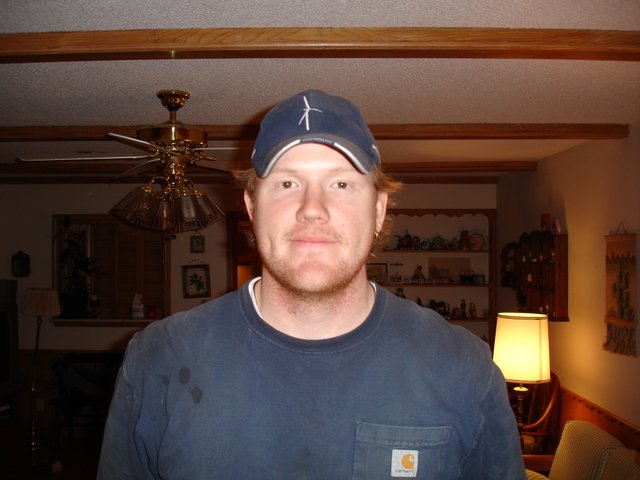 (The face of exhausted enlightenment)

And what else? Well, here’s a list of insights, since I told people about it back then as well.

#1 – Because of construction work, I now have dust in every pore of my body… not to mention a number of orifices. (no not those…)

#2 – My hands have grown large and course, so much so that I find it hard to type these words. They also ache in the morning when I wake up…

#3 – Some people try to be cool by thinking/saying/acting like everything is a burden and generally mouthing off for no reason.

#4 – The people who normally mouth off are the ones that aren’t doing any work.

#5 – Just because someone is the supposed “supervisor” does not mean they know what they are doing. 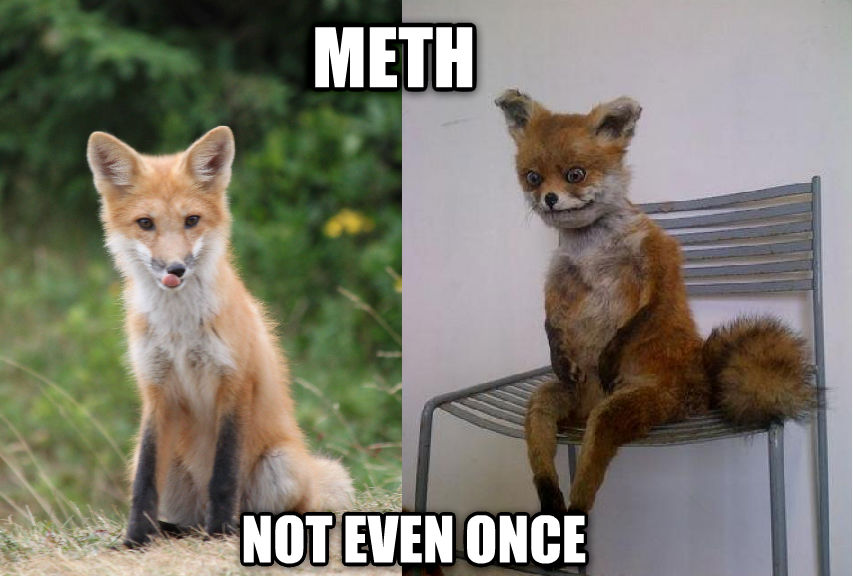 Indicative of the caliber of some of the people I was working with and further to that last point, let me just digress again for another minute. On the construction site, I was working with 2 Apache kids. I’d pick them up for work each day, as I was going on through their town. They in turn would shed a light on some of the stuff going on in the surrounding areas.

But, it’s one day in particular that stands out in my memory. It was the day that they described what was going on with the people in the houses on their street. 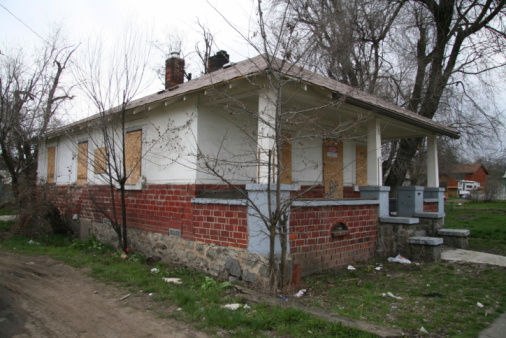 House one and two were filled with Indians, provided places to live by their tribe and their casino; money from gambling. House three was derelict because they had taken to doing meth, then lost their baby, ala “Trainspotting.” House four, five and six had people in jail because of their addiction as well. In fact, half of their street wasn’t even there. They’d all fallen victim to the circumstances of life in the middle of no-where. 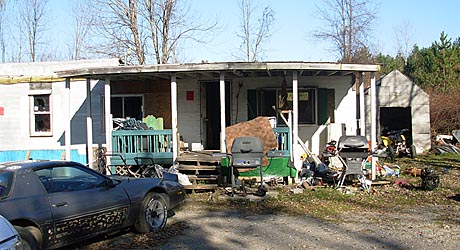 And here I was, a white kid who had grown up and attended one of the best public high schools in the nation. Parents working jobs that provided enough to live well and travel. 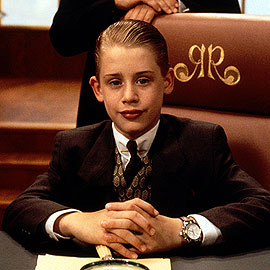 With this in mind, I know why middle America is pissed. They’ve been left behind as companies have gone to other places. Those that live there-in still have to fight to stay afloat. They’ve been fighting since they moved there in the 1800’s and it hasn’t stopped.

Unfortunately, what do you do when it’s cheaper to pay someone in China to do the job? A tough stance on business only makes them run off. Maybe a new work sector then? However, here’s the crazy thing: a lot of the heartland’s people could be employed by new alternative energy; building and maintaining wind farms and solar powered collection sites. However, for whatever reason the government now is pushing again for old coal and oil, contrary to an expanding industry.

Well, whatever. Tis not my place to say. At least I had the experience and got to see a bit of why things are that way.  So let me leave you with a picture of me looking like a goober-on-a-hill.  Beard would have been better back then than working while looking like a child. 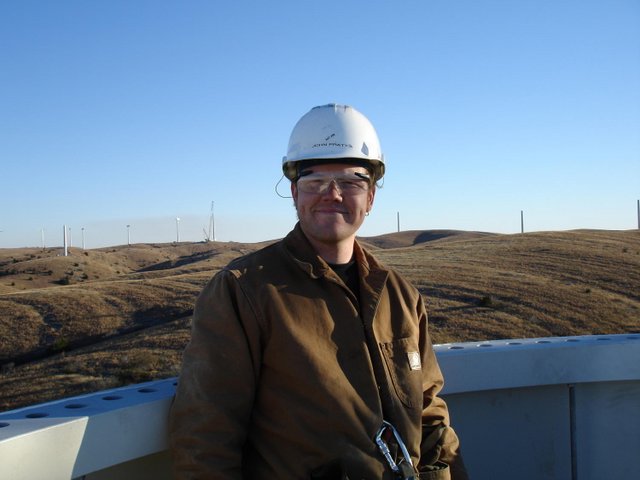